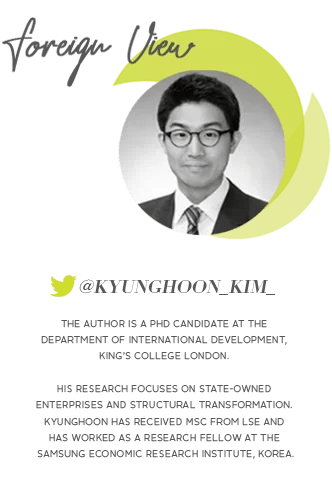 Imagine that you have just become a shareholder of Indonesia’s largest company with a 35% ownership stake. From the first day, you are flooded with information on the financial health, business development, and future prospects of the company.

The Jokowi government significantly expanded investment into state-owned enterprises (SOEs) in the first half of its administration. While the expansion of the SOE sector was not as dramatic as that after the mass nationalisation in the 1950s nor that during the 1970s’ oil boom, it was nonetheless a path-breaking event in the period following the Asian financial crisis.

The government provided this substantial amount of capital to SOEs with the aim of solving various economic challenges faced by Indonesia. Most importantly, a large part of the capital was given to infrastructure-related SOEs. These SOEs are now participating in major infrastructure projects, such as Trans-Sumatra toll road, Greater Jakarta Light Rail Transit, Jakarta-Bandung high-speed railway, and the 35,000 MW electricity programme.

But this is about all the information Indonesian taxpayers have on how recent investments into SOEs are being used. The taxpayers can monitor the quality and quantity of government spending in other areas of which they are the immediate beneficiaries, such as social services and subsidies. However, it is more difficult for everyday citizens to track how the investment in SOEs is being used to their benefit. While Indonesia’s overall budget approval process and government expenditure also require increased transparency, the amount of information on government investment in SOEs is particularly lacking. The government budget documents and financial reports give some broad reasons for investing capital into SOEs. If feeling ambitious, one could examine annual reports of individual SOEs. But even then, it would not be clear how the recent additional capital has translated into changes in corporate activities and benefits to the country’s taxpayers.

It seems that it is not just taxpayers who do not have sufficient information on government investment in SOEs. In 2017, the House of Representatives, which has an important role in approving and auditing government spending, requested that the Supreme Audit Board launch a special inspection of SOEs that have recently received state capital.

The Indonesian government must go further and take proactive steps to publicly sharing more information on how recent investments in SOEs are being used. There are lessons to be learnt from major sovereign wealth funds that maintain high levels of transparency.

For example, Norway’s fund provides detailed information of its investment in more than 9,000 companies in 72 countries. Historical data and investment policies, as well as up-to-date information on the market value, returns, benchmark and management, are readily available on its website and various reports. Singapore’s Temasek is another fund that publicly provides comprehensive information of its financials and portfolio.

Information sharing by Indonesia’s Ministry of SOEs is improving, as can been seen in the recent reports containing profiles of SOEs and SOEs’ strategic infrastructure projects. However, information on SOEs’ activities is still scattered and incomplete, and so observers have issues understanding how the recent investments in SOEs are being used. The missions of SOEs are often abstract, and the government’s aims and expected outcomes of investing in SOEs are vague.

The Indonesian government’s difficulties in providing clear information on the SOE sector’s goals and performance are understandable to a certain extent. Many sovereign wealth funds have long-term financial return as their ultimate goal. In contrast, most Indonesian SOEs still have dual goals of profitability on one hand and social objectives on the other. Many projects that SOEs carry out are not designed to be profitable, and have a long gestation period even if they are profitable.

However, this fact should not be an excuse for the government to share a limited amount of information with the public. The government must measure the performance of SOEs’ strategic activities, both quantitatively and qualitatively, and provide information that is easily accessible and understandable to taxpayers, who are the ultimate shareholders of SOEs. Taxpayers have the right to know how their money is being invested. In recent years, the governments of several developing countries from Brazil to Malaysia were shaken by corruption scandals around state enterprises. Such controversy also made the operation of Indonesia’s previous administration difficult. One of the pre-emptive measures to avoid this kind of political issue would be to enhance the transparency of investment in SOEs, and more broadly, that of the SOE sector. Promising to strengthen transparency after the revelation of corruption or misspending are almost always too late to gain voters’ trust.

The SOE sector will remain an important part of the Indonesian economy in the foreseeable future. Considering Indonesia’s stage of development, SOEs will continue to play a role in providing services and conducting investment in areas that private companies have little interest. While significant improvements in productivity of SOEs must precede, the government will continue facing situations where it must provide direct and indirect finance to SOEs.

For such policies to gain political and social support, the government must be clear about the motives behind providing additional funding, expected performance in the short- to medium-term, and the detailed areas of usage. Providing more information to the public on recent investments in SOEs would be an adequate starting point.

Pinterpolitik has published a translated version of this article.

Previous articleMedan Wise
Next articleAre there any ulterior motives behind Syria strikes?