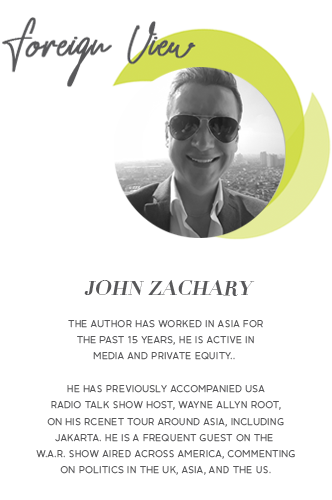 English Premier League soccer legend Dennis Wise visited Medan recently and I was fortunate enough to host him during his stay.

For those of you unfamiliar with the name; Dennis Wise was captain of Chelsea FC from 1993 to 2000, and in a career spanning over 20 years earned 21 caps for England.

I met Dennis through a mutual friend and when he expressed a desire to see the current state of football in Indonesia, I offered a tour of Persatuan Sepak Bola Medan, commonly referred to as PSMS Medan, which is one of the older Indonesian clubs.

PSMS Medan has an illustrious history dating back to Dutch colonial days when Rumah Susun Football Club and Oost Sumatra Voaetbal Bond played in the 1930s. In 1950, the Dutch Military left Medan and these two clubs merged into the modern PSMS Medan club. The team enjoyed considerable success through the 1950s and 60s, becoming a top club and earning the nickname, “The Killers” with their ‘rap-rap’ style of play which is rough, tough, and persistent. After years of decline, they have finally made back into Liga 1 and plan to recapture their former glory years.

To begin our visit, we were first invited for lunch with the Medan soccer legends who played with the club and the national team during the 1960’s and 1970’s.  At that time Indonesian football had more government support due to the held theory that; “A successful national team makes citizens, who would would otherwise have few opportunities for participation in national politics, identify with the nation.”

This is exemplified by President Sukarno ordering the building of the 100,000 capacity Senayan Stadium in order to host the Fourth Asian Games. The football squad received financial support and access to training facilities years in advance and even at the grass roots, access to a football pitch and a ball were available to many.

This resulted in a respectably good national side.  It wasn’t perfect, but there were football pitches to learn the game on and receive coaching. According to the Medan legends; Parlin Siagian, Noban Kayamuddin, Tunsila, Ismail Ruslan and Suwarno, they had a good team and winning record with a ranking around the late 1920’s in world football and were considered the best in Southeast Asia. They most certainly didn’t have the ranking afforded to the current Indonesian national team. As of today, Indonesia is ranked 162nd in the World by FIFA.

Given what the Medan legends had told us, how had Indonesian football fallen so far over the decades since they were playing? Not only that, but the Indonesian government has also failed to realize that football is crucial in nation building.

“The paradox that all aspiring nations face is that, to project a sense of national unity and identity on the world stage, they must adjust to an increasingly uniform set of strategies, including good performance in dominant sport.” – Barrie Houlihan, 1997

A Pitch in the Dark

The first thing that struck Dennis was that the players moved around the field without purpose and direction. He could see plenty of talent and technical skills, but all this was going to waste because nobody knew what their job was, and the structure of the team was missing.

Sounds familiar doesn’t it? When you look at Indonesian football as a whole, the first thing to strike you is the amazing disparity between the obvious talent in the country and the success of the national team. Just like the U15’s we were watching they are rudderless and without direction.

Indonesian football has been kicked around politically now for decades and as the government has retreated, corruption has blossomed and the national game has suffered and diminished.

PSSI, the ruling Football Association of Indonesia are continually mired in bribery and match-fixing scandals and have gone through several reincarnations, each time promising professionalism and transparency in the local game. So bad had it become in 2011 that the Ministry of Internal Affairs banned the use of state funds in football following  the anti-graft watchdog accusing  that the PSSI management  of stealing over $50 million from the state budget. The support of the local game has since shifted instead to sponsors and advertisers. This consensus on government support has been given over to the free market.

Effectively now, football in Indonesia has no grassroots pushing the sport forward and no available resources to provide opportunities for those that can’t afford to pay for soccer schools affiliated to local and international clubs.

A local dispute or some political motive or financial motive takes precedent over the general good: a typical example of this is the soccer school in Medan. Speaking with the owner he tells us, the land has been designated for use as a football field only. Although he’s expressed a desire to begin construction for more facilities, he lacks the permission to do so. The school’s many requests to upkeep the pitch and plant fresh grass have been rejected and the condition has deteriorated. They are now involved in a war of attrition, leaving the land unfit as a sports field to train young players.

This year Jakarta and Palembang are hosting the Asian Games, while important in the region, they have little impact on the world stage. As I travel extensively around the world, one thing that always strikes me is how little is known of Indonesia. Bali is a name that is always recognised, but Jakarta leaves most nonplussed. Everybody knows Singapore, Bangkok and even Kuala Lumpur, but the powerhouse of Southeast Asia is scarcely known outside the region.

With a successful football team, Indonesia will begin to take its rightful place in the consciousness of world citizens. It will represent the vibrancy, youth and hope of Indonesia. With government and grassroots support, the nation will be able produce the football team we all know the country has the talent to do and which the whole country would like to see.

To underline this, I revert back to my guest in Medan; Dennis Wise. During our visit to SD Pasar Nippon, he did a mini training session with a few of the boys. These were children no more than 6 or 7 years old. When Dennis asked me: Where is the pitch?” I told him: “You’re standing on it!”

He couldn’t believe that concrete was what the kids had as a sport facility. This is where change is needed. More than the problems at the top of football, it is with these kids and kids all around Indonesia, where the future of football lies and where a World Champion Indonesian team is waiting to be discovered.

I leave the last words to Dennis. When I asked him; “What are your thoughts from your visit?”

He replied: “I think Indonesia is a wonderful place, but unfortunately, to help children be a footballer, there’s not enough correct facilities for them to be able to learn and understand how football is taught and how they play.”

I had to ask one more question, so I did. “In Indonesia with its 260 million population; there’s got to be a few Lionel Messi’s wandering around?

“I think they must have. Yes.”

So I asked, “What is the missing key?”

“The missing key is infrastructure. Without a football field and a ball Indonesian kids are going to find it very, very difficult.”