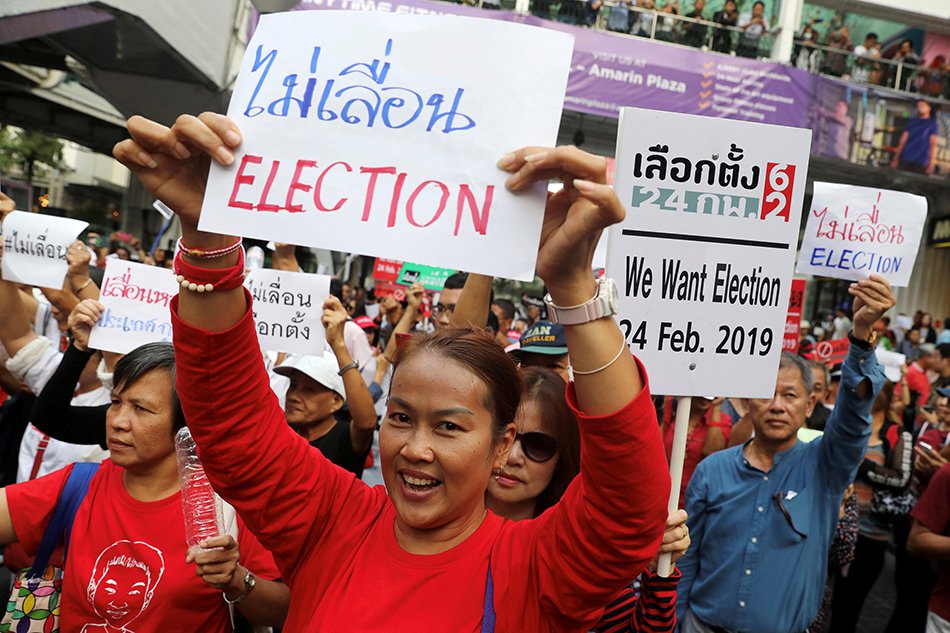 [dropcap]A[/dropcap]fter nearly five years under a junta, Thailand will hold national elections on March 24. They could be a turning point for a country that has been considered one of the most stable states in Southeast Asia despite weathering nearly two decades of political strife. More likely, though, the elections will further entrench rule by the military and an increasingly assertive monarchy at a time when many Southeast Asian democracies are failing.

From Crisis to Crisis

Thailand, a democracy for most of the 1990s and early 2000s, has in the past decade had two military coups (in 2006 and 2014), violent street protests, a standoff in which the army and vigilantes killed at least ninety people in Bangkok (2010), and a lengthy insurgency in the southernmost provinces. Though the Thai army seemed to accept civilian rule in the 1990s and early 2000s, it once again regularly intervenes in politics and considers itself, along with the monarchy, the bedrock of national stability.

The coups ousted populist political parties linked to Thaksin Shinawatra, long the country’s dominant political figure. The army has more recently overseen the passage of a constitution and other laws designed to entrench its power. The constitution makes it harder for any one party—such as Thaksin’s Puea Thai Party—to win a majority of seats in the lower house of parliament. A party allied to Thaksin, the Thai Raksa Chart Party, will likely be banned from the election. The army and its supporters maintain their political base in Bangkok, creating a divide between the capital and the rural north and northeast, Puea Thai’s base. The army previously worked in concert with the monarch, but under Thailand’s new king the monarchy has increasingly dominated the army, taking direct control of the Crown Property Bureau(a state agency that controls some $30 billion in assets), reshuffles in the armed forces, and other major issues.

Thailand’s elected politicians are not blameless. Although Thaksin and his successors have won every election since 2001, in office they often further corroded democratic institutions. Thaksin launched a brutal war on drugs during his time in office (2001–2006) that reportedly resulted in thousands of extrajudicial killings.

The election itself will probably be relatively free, but despite considerable popular excitement, the road to election day has not been fair. Thailand’s junta has created a highly repressive environment, restricting online discourse and detaining activists, opposition politicians, academics, and writers. Still, Puea Thai reportedly remains the most popular political party.

No matter who wins, Thailand will likely remain in political crisis. If Puea Thai and its allies gain control of the lower house of parliament, the military and its allies will likely respond harshly. They could use the courts or the bureaucracy to weaken a pro-Thaksin coalition and jail its leaders. These are tactics the army and its allies have used in the past.

Though the army’s favored parties are unlikely to win a majority in the lower house, they could maneuver after the election to get many small parties to back them—and then make junta leader Prayuth Chan-ocha prime minister. In this scenario, Thailand would have essentially a democratic facade, behind which the military and the king remain the true powers. If pro-military parties succeed in this maneuvering, it could cause blowback from Puea Thai backers’s. Either scenario could trigger violence among supporters of Puea Thai and other pro-Thaksin parties.

Continued unrest would harm regional stability and U.S. interests; Thailand is a treaty ally of the United States, as well as a leading trading partner and a regional hub for many of its agencies. Political instability would also hamper efforts to suppress the southern insurgency, which has killed some seven thousand people since the early 2000s.

Political inconsistency in the kingdom scares off investors, yet new investment is necessary for Thailand to modernize its economy. The government’s tilt toward authoritarianism provides an opportunity for Beijing to bolster its diplomatic and defense links with Bangkok.

Recent weeks have demonstrated that behind any facade of democracy, the monarchy has grown more influential in Thai politics, as Eugenie Merieau of the University of Gottingen has noted. Thailand’s kings have always played a significant role in politicsdespite theoretically being constrained by the constitution. But the king now has amassed far greater political, military, economic, and religious power, undermining the prospects for a return to pluralistic democracy no matter what happens in March.