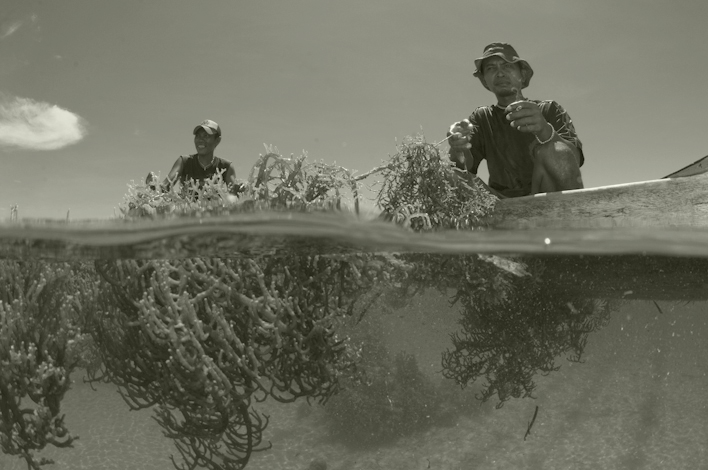 (Originally published in The Guardian)

[dropcap]I[/dropcap]ndonesia produces more marine plastic pollution than any other country except China. It is the world’s biggest archipelago also its fourth most populous. Limited income and cash flow means that poorer communities are reliant on cheap single use plastics, on top of rudimentary waste management.

Last year Indonesia pledged US$1 billion to cut its marine waste by 70% by 2025. It is an ambitious target with the constant changes in consumer habits and need to improve waste management infrastructure as well as scale up to biodegradable alternatives.

Indonesia’s seaweed production is second only to China and is increasing by an estimated 30% a year. Indonesia is also the world’s biggest producer of red seaweed, a variety that’s ideal for creating bio-plastics and packaging.

Currently, most bio-plastics derive from terrestrial sources related to the food industry, including corn, sugarcane and cassava. However, according to Bakti Berlyanto Sedayu, a researcher with the Ministry of Marine Affairs and Fisheries, seaweed is a far more sustainable alternative. Sedayu says that land based bio-plastics require huge investments in land, risking the kind of catastrophic deforestation we’re seeing with palm oil.

By contrast, seaweed is cheap to produce as it is cultivated offshore, grows quickly and doesn’t require fresh water or chemicals to grow successfully. Seaweed beds are also natural carbon sinks, de-acidifying water.

Conditions in Indonesia are ideal for seaweed farming, as the sun shines more or less year round and there are more than 34,000 miles of coastline. As the pressure on fish stocks continue to rise, coastal populations are turning to aquaculture as an alternative. Sedayu believes it could take just five to ten years to bring the production of bio-plastics up to an industrial scale – though this would require careful management.

For now, seaweed based packaging is barely in its infancy. Indonesian start up Evoware is producing seaweed products that are edible, including jelly glasses, sachets and food wrapping. But they are produced by hand and are only available for companies to sample as part of their testing phase. David Christian, the founder and CEO, explains that Evoware is expected to be fully automated by 2019. “When that happens, our edible packaging will cost around 30% more than existing plastics, which is competitive.”

The company also work directly with seaweed growers. Right now, 80% of seaweed is processed outside Indonesia and the lengthy supply chains mean that farmers see a small fraction of the profit. “We teach them how to grow high quality seaweed and to wash it properly, plus we pay double the price they’d normally get,” says Christian.

Companies and consumers will need to change their practices if seaweed based packaging and bio-plastics are to have any hope of going mainstream. Citizen movements like the Bye Bye Plastic Bags campaign Bali – a local project led by schoolchildren that has gone global – have helped put the issue of plastic waste in the spotlight.

For the last three years, the annual Coral Triangle Day celebrations, which fall on June 9 after World Ocean’s Day, have included a social media contest to encourage consumers to reconsider their relationship with single-use plastics.

The Indonesian will now need to develop legal frameworks at national and regional levels to provide a foundation for new supply chains, effective waste management and community engagement. It has signed up to the UN Clean Seas campaign, a promising move by the government however pledges need now to be backed by concerted, concrete action.