Home Foreign View Are there any ulterior motives behind Syria strikes? 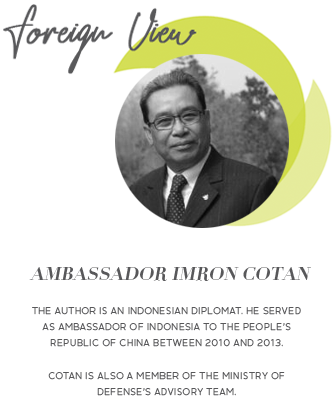 Apparently President Bashar al-Assad and his minders are very determined to recapture Douma, countryside located at the southwestern of Damascus, the capital.

Douma is militarily strategic as it surrounds Damascus and also supplies water to the city. It is therefore no coincidence that the Syrian armed forces loyal to President al-Assad have long tried to dislodge the rebels from this strategic area with the help of Russians and Iranians.

In order to fully recapture this strategic chocking point, the Syrian armed forces in April 7, 2018 took an offensive maneuver in an attempt to finally recapture the rebels’ last stronghold in Douma, during which they allegedly used chemical weapons. Media reported that at least the attacks fatally wounded 40 civilians.

The US was quick to assert that Syria is responsible for the chemical weapons attacks and, working closely with the United Kingdom and France, unilaterally launched a series of coordinated bombings on at least three targets suspected to be the sites, where Syria conducted research, produced, and stored its chemical weapons in Damascus and Homs respectively.

It is quite puzzling though that the international community, including the Organization of Chemical Weapons Convention, whose headquarters located at The Hague, did not detect any dangerous chemical substances emanating from the attacked sites, an inexplicable clue that no one bothers to investigate further.

The military strikes taken by the trio were prompt. In less than 24 hours President Trump declared ‘mission accomplished‘. Arguably, such an attack should get the authorization of the United Nations Security Council, as required by Chapter VII of the United Nations Charter, mandating the Council to take either military or non-military actions if it considers that the international peace and security is in peril.

The US Congress and Senate are also equally divided on the legality of the strikes. Some congressmen and senators argued that any military strikes against foreign countries required a Congressional approval, consistent with the US Constitution and 1973 Act of War.

Without the declaration of war, the legal standing of the servicemen involved in the strikes will be debatable. If captured by Syrian or Russian or Iranian forces, these servicemen could not be classified as prisoners of war, whose rights are fully protected by Protocol I and II of 1949 the Geneva Convention.

In an attempt to condemn the strikes and redress the situation, Russia invoked its rights to call on an emergency session of the UN Security Council. The draft resolution tabled by Russia to that effect was however blocked by the US, France and the UK. A number of Council’s non-permanent members also voted against the Russian initiative.

In the meantime, Russia accused that the chemical weapons attacks were actually orchestrated by ‘a third party’, in order to prepare the grounds for the US, France and the UK to attack Syria and further tarnished Russian image in the case of alleged chemical weapons attack against Sergei Skripal, Russian former double agent and his daughter in Salisbury, the UK, March 4, 2018.

It is very interesting to note that a few weeks prior to the attacks, Russian Chief of General Staff, General Valery Gerasimov revealed publicly that he had received intelligence information, indicating that chemical weapons attacks were imminent in Douma.

If the strikes were all well planned, one may argue that the objective would be two-fold: the first is to retake the momentum from the advancing of Syrian armed forces; and second, to finally topple President al-Assad’s regime.

Trying to seemingly avoid confrontation any further with Russia – whose military units are actively operating in Syria in support of President al-Assad – the US was quick to announce that it has no intention to change the government in this civil-war ravaged country. In the wake of the strikes, Senator John McCain criticized President Trump’s lack of a comprehensive strategy for Syria and the entire region, without which he saw no end to the Syrian civil war (Reuter, April 15, 2018).

The lack of Washington’s strategic objective in Syria also puzzled many international observers, as the US has long stated that the use of chemical weapons by Syria is barbaric, hence off-limit. Former President Obama also had, on many occasions, stated that the US would mount punitive military actions against Syria if it used chemical weapons.

Speculations emerged therefore among many international observers, questioning the real motives of the strikes mounted against Syria by the US with the assistance of France and the UK. The absence of NATO collective military actions is also very conspicuous. It crystal-clearly indicated that the US did not have sufficient grounds to rally NATO countries’ supports.

Speculations further abound by the fact that President Donald Trump abruptly decided to cancel his long-anticipated multilateral visit to Lima, Peru to attend the Summit of the Americas and bilateral visit to Bogota, Colombia, indicating that he probably had ulterior motives other than the use of chemical weapons in striking Syria.

In the world of diplomacy, it is indeed rare a case in which the head of governments decide to cancel abruptly their visits, for not only it will deny the opportunities for top leaders to meet and sign agreements to strengthen, widen, and deepen multilateral or bilateral ties, which have been meticulously negotiated prior to the visits, but will also embarrass the hosting countries diplomatically.

The cancelation of the two visits was publicly announced immediately after the FBI raided the offices and home of Michael Cohen, President Trump’s personal lawyer (Reuter, April 10, 2018), apparently upon the request of Special Counsel Robert Mueller. It remains to be seen whether it was purely coincidence or otherwise.

Special Counsel Mueller is currently conducting an extensive investigation to try to probe the role of Russia in the United States’ presidential election in 2016, the end result of which may pave the way for President Trump’s impeachment.

President Trump alleged sexual scandals with several women, who were apparently bribed by Cohen to remain silent especially during the previous presidential campaigns, have furthermore made his political standing shaky.

Whether these are the ulterior motives of President Trump’s decision to strike Syria will surely be continuously debated by pundits. All countries in the world need however to be vigilant, for any miscalculations committed by either the US or Russia may lead to the outbreak of the third world war, the consequences of which would be far beyond our imagination.

Cognizant of the fact that this Syrian crisis may trigger conflicts of a global scale, as leader of the Non-Aligned Movement – together with other key regional player around the world – Indonesia should take a leading role to try to reduce tension. Indonesia is well positioned to channel the Non-Aligned Movement’s aspiration for international peace and stability, as it has excellent ties with the two opposing camps. Merely sitting on the fence to watch such a chilling scenario unfolding is a sin of constitutional proportion.

Indonesia is duty-bound to participate in the establishment of global order based on universal freedom, enduring peace, and social justice, as enshrined in the Preamble of the 1945 Constitution.

In the same vein, conflicts in Syria can also be used as a strong reminder for public at home front that no matter how trivial an internal conflict seems to be, it can surely be seized and manipulated by outside powers to divide, conquer, and finally secure Indonesia’s abundant natural resources for their selfish gains.

Our leaders from both fences are therefore compelled to urgently help unite the nation, leaving behind non-essential disputes before this doomsday scenario befalling Indonesia.